NORTHFIELD — The Planning Board held preliminary discussions regarding three potential “dual use” solar arrays proposed for Pine Meadow Road during its most recent meeting last week. 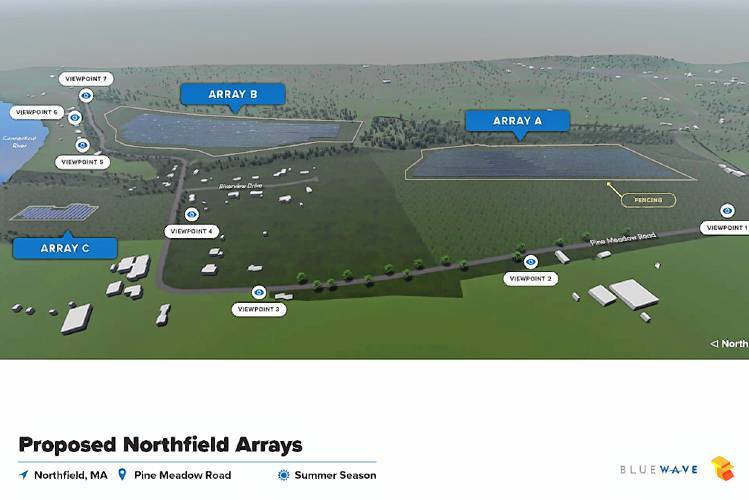 The meeting, held via Zoom, saw about 15 people in virtual attendance between residents and members of various town boards to hear from Rich Riccio of Field Engineering and Jackie Firsty of the Boston-based BlueWave Solar, the proposed developers. Future dates for public hearings regarding the project have not been announced.

According to Riccio, the project would consist of three arrays on land owned by the L’Etoile family and Four Star Farms off of Pine Meadow Road. As an agricultural dual use project, Riccio explained, the plan is to continue the agricultural use of the property while supporting the on-site operations.

“Generally, the dual use project arrays’ modules are raised up a little higher off the ground than a typical array, and the rows are spaced out a little bit more to allow more sunlight to get through to the ground to support the crop growth beneath,” he said.

Aside from the ability to grow food crops under the panels, dual use projects can allow for grazing of small animals such as sheep. Riccio said the proposed arrays would be enclosed with a woven fencing, as opposed to a typical metal chain link, to blend in with the agricultural surroundings. During a previous community meeting with abutters, Riccio said, residents had suggested using vegetation, such as evergreen trees, along the fence, to help conceal the proposed arrays.

According to Riccio, no tree clearing would be required. The southern array, “Array A,” would be roughly 26 acres and be located “more or less directly” across from the Four Star Farms main building along Pine Meadow Road. It would generate roughly 4 megawatts of power.

“All three of the arrays would be tied into the power lines located on Pine Meadow Road, with three separate interconnection points,” Riccio explained. “One of the positive aspects of this project is that to tie this power into the grid over there, they need to upgrade the existing infrastructure.”

The proposed project, he said, would improve the L’Etoile family’s farming operations, allowing them to operate “much more efficiently” with better equipment than what’s running now on a single-phase circuit. Should the projects be approved, Firsty and Riccio said construction would likely begin during the summer and fall of 2021, with construction predicted to take up to six months.

The three proposed arrays are all being submitted for separate permits to the Planning Board, so it is possible they will be approved or declined individually. At the end of last week’s meeting, Planning Board Chair Stephen Seredynski and member Homer Stavely said they felt the meeting produced good preliminary discussion.

“We’re very excited to be working with the L’Etoiles on this project,” Firsty said. “It really puts farming first, which is really important to us and we know that it’s important to Northfield, as well.”

This article & photograph originally appeared in a Greenfield Recorder post on November, 25th, 2020.