Solar Panels + Agriculture: You Ain’t Seen Nothing Yet 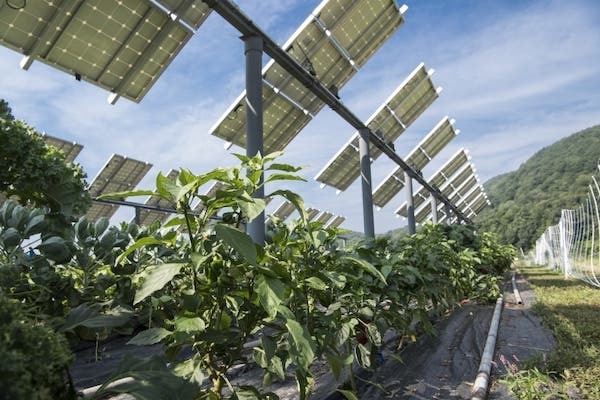 It seems like only yesterday that the idea of combining solar panels with agriculture was just a twinkle in somebody’s eye. All of a sudden the field is exploding, so to speak. In the latest development, the US Department of Energy is putting down $7 million to sow the seeds for a new revolution in American farming. That’s just a drop in the bucket compared to, oh, say, $1 billion for the FutureGen carbon capture project, but in this case a little goes a long way.

If deploying solar panels to assist the pursuit of growing things seems a bit counterintuitive, there’s a good reason for that. Until very recently, solar arrays have been the enemy of agriculture. Typical solar developments have involved papering rows of PV panels over acres of land that could be used for growing crops for people and livestock.

The income from solar leases does provide a lifeline for American farmers who have been struggling with the challenges of the global food market, which have been exacerbated under President* Trump’s trade policies. However, if the current trend continues, the US and other nations will bump into global food supply issues.

The National Renewable Energy Laboratory, for one, has estimated that the US alone could lose 2 million acres of land to solar panels by 2030.

In the best of all possible worlds, solar panels could be raised just a few extra feet off the ground, which would enable farmers to benefit from the renewable energy income while also growing crops or raising livestock in among the PV.

CleanTechnica caught wind of the trend a while back, when researchers at Oregon State University described how solar arrays can create a cooling microclimate that enhances the environment for various crops. They also gathered evidence that the same cooling effect improves the efficiency of the solar panels.

Since then, the knowledge base on the benefits of PV for improving crop and fodder yields has been swelling, the Energy Department has come out with a “farm to lightbulb” guide for farmers, and the movement has begun to take hold in various forms around the nation.

Using the land under solar panels for grazing livestock or establishing pollinator habitats is quickly becoming old hat. New forms of agrivoltaics are already emerging. In Massachusetts, for example, cranberry farmers have found that they can cultivate sprouts under solar arrays, and state policy makers have glommed on to the idea that the PV angle could help attract a new generation of farmers to the ag business.

Something interesting is also happening in Minnesota. Generations of farming have exhausted the soil in the North Star State, and now the state is turning to solar arrays for an assist. That thing about microclimate is the key. It dovetails with regenerative agriculture, which deploys agricultural practices that conserve water and energy while building soil and improving soil health.

In fact, the agrivoltaic-regenerative farming area has already gone mainstream. Solar firms of all sizes, from the US company BlueWave on up to BP’s Lightsource BP offshoot are incorporating regenerative agriculture into their solar pitches.

US Energy Dept. Has $7 Million More For Agrivoltaic Revolution

That brings us to the new $7 million round of funding from the US Department of Energy. It was bundled into a $130 million package covering all sorts of solar technologies, but we’ll get to them some other time.

The dollars are not aimed exclusively at benefiting farmers. The four projects that qualified for a share of the pie also had to demonstrate benefits to the local community and local economic activity, too.

The National Center for Appropriate Technology in Butte, Montana got $1,600,000 from the Energy Department and is chipping in another $430,000 for something called the Agri-Solar Clearinghouse, which will establish an “online national resource clearinghouse and technical assistance program for farmers, solar companies, and other stakeholders interested in co-locating solar and agriculture.”

Aside from virtual access, the project also includes workshops and farm tours.

Our friends over at Silicon Ranch Corporation in Tennessee (yes, that’s under the Shell umbrella) will be working on a mouthful of a project it’s calling the “Integrated PV System Design and Management Platform for the Co-Optimization of Regenerative Cattle Grazing and PV Solar Generation,” which is actually a souped-up tracker that integrates solar tracking with the movement of cattle. The company is adding $570,000 in cost sharing dollars to its $1,800,000 Energy Department grant.

The University of Illinois in Chicago is doing something called “Evaluation of Economic, Ecological, and Performance Impacts of Co-Located Pollinator Plantings at Large-Scale Solar Installations” with a $1,800,000 assist from the Energy Department and $470,000 of its own money.

The project will be shepherded along by the University’s bioenergy and sustainable landscape expert, Iris Caldwell. Under her watchful eye researchers will scrutinize pollinator habitats at five different solar arrays in the Midwest and Mid-Atlantic, weighing in at 10 megawatts or more apiece.

The research team will take solar performance impacts under consideration as well as examining the economic and environmental angles, with an eye toward developing best practices and resources including a cost-benefit calculator and native seed mix selection tool, and a pollinator assessment tool. These tools will address critical stakeholder concerns.

Rounding out the four awardees is the University of Massachusetts at Amherst with “Impacts of Dual-Use Solar on Crop Productivity and the Agricultural Economy in Massachusetts and Beyond.” The cost share for this one breaks down at $1,800,000 from the Energy Department and $540,000 from the school.

“The project will model the economic and social impact of solar-agriculture co-location on farms and surrounding regions. The team will assess crop productivity, soil health, and microclimatic conditions for a range of crops under various solar array designs project at eight operating commercial farms in Massachusetts,” the school explains.

“The team will also study public acceptance of solar-agriculture co-location and develop practical co-location management guidelines for growers, solar developers, and other relevant stakeholders,” they add.

So, Whatever Happened To Carbon Capture?

None of this is good news for fans of carbon capture at fossil power plants, by the way. Natural soil and plant sequestration is emerging as a significant path toward the decarbonized economy of the future, with none other than the US Department of Defense taking a close look at the possibilities.

The Energy Department already got a jump on the ball back in 2016 with its ROOTS program. Funded through its cutting-edge tech office ARPA-E, ROOTS aims at developing crops that are more talented at sequestering carbon while improving soil health, too.

As for FutureGen, that was the Energy Department’s showcase for carbon capture and it was supposed to secure the US coal industry’s grip on domestic power production. However, the project was mothballed all the way back in 2015.

Carbon capture technology has improved since then, but it is still burdened by cost, risk, and the rise of more economically beneficial alternatives, including the accelerating trend of meshing solar panels with energy storage.

Just take the now-infamous San Juan Generating Station in New Mexico, for example. It is one of many coal-fired power plants to make the retirement list, but fans of fossil fuels were hoping that a modern carbon capture system would keep it up and running long past its drop-dead date in 2022.

Dream on, Klingons. Just two days ago our friends over at Power Magazine reported that the Public Service Company of New Mexico (PNM) is already eyeballing a plan to replace the lost output with a group of solar-plus-storage systems to be dubbed the Four Corners Solar Center (also check out Albuquerque Journal for more details).

That project comes under the wing of the firm Photosol US, which is new to the CleanTechnica radar, but you will probably be hearing more from them because it’s an offshoot of the French company Photosol, which has been making some big moves around the globe of late.

To make things even more interesting, the whole project dovetails with the Navajo Transitional Energy Co., a Native-owned coal company that is diversifying into renewables.

Coal stakeholders haven’t lost their San Juan lifeline just yet, so stay tuned for more on that.

This article & photograph originally appeared in a CleanTechnica post on November, 19, 2020.

Tina specializes in military and corporate sustainability, advanced technology, emerging materials, biofuels, and water and wastewater issues. Tina’s articles are reposted frequently on Reuters, Scientific American, and many other sites. Views expressed are her own. Follow her on Twitter @TinaMCasey and Google+.