As New Jersey begins a pilot program for solar fields that accommodate farming, a Massachusetts solar developer aims to be at the forefront of the action. 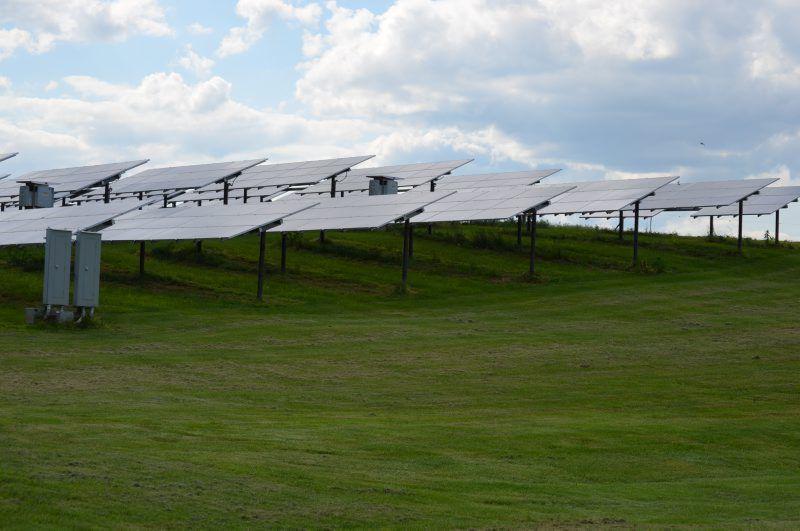 Mark Sylvia, head of policy and government affairs at Boston-based BlueWave Solar, said dual use could help farmers stay in business and address concerns that solar takes farmland out of production.

“The farmer is able to continue to maintain that family farm. They’re able to also invest in their farming activities,” Sylvia said.

Dual-use solar, also known as agrivoltaics, keeps the land in farm production by spacing out the panels or elevating them on 6- to 8-foot poles.

BlueWave says the height of the poles varies based on the crops, livestock and equipment that will be used in the field.

And quite a few crops might fit in this production system.

BlueWave already has dual-use solar on a wild blueberry farm in Rockport, Maine, and on a farm in Grafton, Massachusetts, where squash and leafy greens will be planted under elevated panels.

In New Jersey, BlueWave is looking at soybeans, corn, hay and asparagus.

Among livestock, sheep have received the most attention for grazing solar fields because they pose the least risk of damaging the panels.

BlueWave has grazed sheep at several projects in Massachusetts and is looking to work with them in New Jersey.

In its decade of existence, BlueWave has developed over 155 megawatts of solar generating capacity in Massachusetts, and is in the process of developing roughly another 50.

Before entering New Jersey, the company was mostly active in Massachusetts and Maine, though staff have also had some discussions with officials in New York about dual-use solar, Sylvia said.

Expanding to New Jersey is particularly appealing because of the state’s aggressive renewable energy goals, Sylvia said. Gov. Phil Murphy wants the state to run completely on clean energy by 2050.

In July, New Jersey approved a three-year pilot program for dual-use solar projects on unpreserved farmland. The program includes limits on the scale of projects, and affords protections for high-value soils and ecological sites.

The law gives New Jersey’s Board of Public Utilities 180 days to write the rules for the program.

BlueWave lobbied for the creation of the dual-use program, as did the New Jersey Farm Bureau and other groups.

At one hearing on the legislation, Farm Bureau spokesman Ed Wengryn said dual use could be particularly valuable for the state’s $85 million blueberry industry. Though farmed blueberry bushes are typically grown in open fields, their wild cousins don’t often get full sun.

“We’re interested to see if adding shade to a current production could actually increase the yields that our blueberry fields get,” Wengryn said.

As part of the pilot program, Rutgers will study the effectiveness of farming in dual-use installations. BlueWave is already involved in similar research with the land-grant universities in Maine and Massachusetts.

Sylvia said the lease payments for dual-use projects could help farmers remain in business while overcoming concerns about solar taking good farmland out of production.

“There’s a win-win benefit for the farmer, for the community,” Sylvia said.

This article & photograph originally appeared in a Lancaster Farming post on September 10, 2021 by Phil Gruber.