A new solar array at a blueberry farm seeks to demonstrate how both can thrive, as the state convenes a study group seeking ways to accommodate renewable energy on agricultural land. 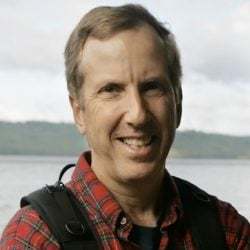 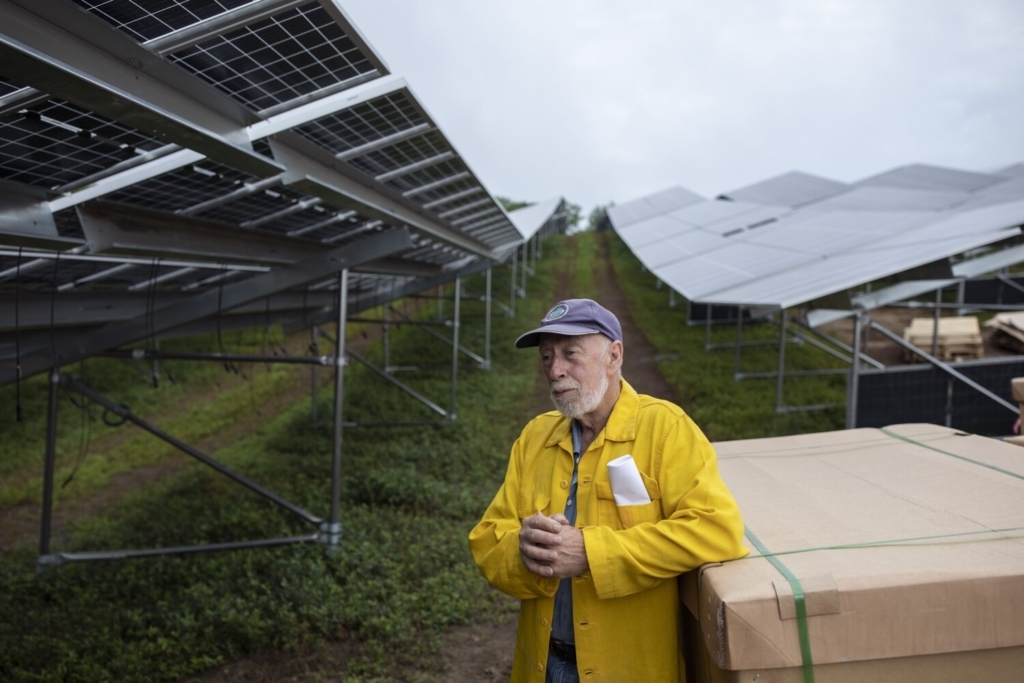 ROCKPORT — They are coming a bit early this season, but lavender specks are beginning to color the low-bush blueberry fields here on a hillside off Route 17. But that’s not the biggest news.

What has area farmers talking are the 10,608 solar-electric panels or modules that construction crews are installing on metal racks that traverse roughly 12 acres of south-sloping fields. This acreage is about to undergo a unique crop trial, to see how well sunshine can produce both energy and blueberries in the same space.

This is Maine’s first commercial-scale dual-use or agrivoltaics project, terms of phrase that signify the combination of solar energy production and agriculture. Roughly a dozen growers last month toured the site, which is being developed by Boston-based BlueWave Solar and Navisun LLC, the Massachusetts solar power producer that will own and operate it.

Agrivoltaics is a new idea for growers of Maine’s iconic wild blueberry crop, which has been buffeted in recent years by low prices, drought and labor challenges.

Lily Calderwood, a wild blueberry specialist at the University of Maine, touches a patch where wild blueberries have been temporarily impacted at a new solar project in Rockport that combines solar panels with blueberry farming. Calderwood said the impacted blueberries will grow back since most of the plant is under the ground, but it will take a few years. Brianna Soukup/Staff Photographer

The project will shed light on how valuable agricultural land can accommodate both solar installations and crops, perhaps easing the tension between land uses that may be in competition.

As they trekked uphill, these growers wondered if hosting a solar farm on some of their land could help ease their challenges.

“They’re curious about how it’s going to work and they’re curious if they could make some money,” said Lily Calderwood, wild blueberry specialist at the University of Maine Cooperative Extension Service. “What changes would they need to make for it to work on their land?”

And what changes would Maine policymakers need to consider to encourage the growth of agrivoltaics?

The solar panels and the blueberries growing beneath them here are at the intersection of two climate change priorities for Maine – promote renewable energy development to reduce greenhouse gas emissions and protect agricultural land to increase local food supply.

These goals, seemingly at odds, also are the focus of a newly formed stakeholder group made up of state and local officials, conservation interests and farmland advocates. They’re trying to develop policies to balance those two ambitions. The group is meeting monthly and will present recommendations to the Legislature in January

“Dual-use farmland,” the solar/ag stakeholder group says in an opening statement, “can be an important tool for diversifying income to farms,” noting opportunities to integrate solar panels with pollinator habitat, meadows and grassland and mixed agricultural uses.

But how important? And at what cost? The early experiences in Rockport could help inform eventual policy decisions.

Roughly 12 acres of wild blueberry fields in Rockport are being covered with more than 10,000 solar panels, a first-in-Maine experiment in dual-use design to pair solar energy with agriculture. Special construction and design techniques are being used to maximize power production while minimizing impact on the crop. Developers and agriculture officials hope the lessons learned can be applied to other blueberry farms. Photo courtesy of BlueWave Solar

States including Massachusetts offer a financial incentive for developers that build dual-use projects which satisfy certain criteria, such as panel height and percent of shading. But elevating panels 8 or 10 feet off the ground so harvesters can move under them, or spacing panels to admit more sunlight to the ground, adds to development costs.

It’s too early to say if Maine will follow that route. But solar developers are watching. BlueWave Solar has been considering a second project, on blueberry land near Machias, but is waiting to see if Maine creates a Massachusetts-style incentive.

Laws and policies enacted by the Maine Legislature in 2019 to encourage solar development have led to an explosion of proposals and projects across the state.

But despite all the activity, a Portland Press Herald story last year detailed how Maine has had no specific rules for where community solar and other midsize arrays should be sited, as some states do. The decisions have been largely left to developers and landowners, as well as existing state and local permit review processes.

Roughly 14 percent of Maine, or 2.9 million acres, is considered farmland that’s prime or of statewide importance, according to the state’s agriculture department. This acreage is generally defined as having the best combination of characteristics such as soil quality and moisture supply for producing food, forage and other crops.

The Public Utilities Commission does have a requirement in its large-scale solar procurement program that no more than 10 percent of a project is located on prime and important farmland. Protecting those soils is a focus of the solar/ag stakeholder group. How that could look on blueberry fields is now being studied in Rockport.

Growers toured a field last week that also was a busy construction zone.

Trucks, loaders and ATVs scurried across the site as lead contractor CS Energy and its partners unloaded and moved big boxes of solar-electric modules. They’re being installed on thousands of metal racks supported by steel legs set into drill holes in the bedrock.

Crews had erected poles and were stringing wire along a rocky access road. The 4-megawatt project will send power to Central Maine Power’s electric system, enough to run 800 homes. Being near a heavy-duty, three-phase utility connection is one reason this site was chosen. Solar isn’t cost-effective in remote farm fields far off the grid.

Alan Robertson, back right, who works for BlueWave Solar, talks to people about the solar panels they have installed at a new solar project in Rockport that combines panels with blueberry farming. Brianna Soukup/Staff Photographe

BlueWave has designated three distinct areas to study the impact of construction on berry production. In a 10,000-square-foot “extra careful” area, poly mats were placed over the low-lying bushes to minimize soil compaction and plant disturbance. In a 101,000-square-foot “careful” area, only vehicles with rubber tracks were allowed. There were no restrictions in a 148,000-square-foot section.

Racks flow across the landscape in undulating lines that follow the terrain, with the modules tilted toward the sun. These racks are a bit more than 4 feet off the ground on their low sides; at least 8 feet on their high sides. That extra clearance will allow people and harvesting equipment to get underneath.

Some of the modules are special, too. They’re bifacial, meaning they can produce some energy through their back sides, from reflection off the ground. They’ll also let the bushes get more sunlight.

But even gentler construction techniques have left their mark. Between the rack rows, dark earthen paths reveal where the drilling rigs and other equipment have torn up the bushes.

They should grow back in a few years, said Paul Sweetland, as he reached down to show some new runners beginning to emerge. Sweetland has managed this land for years. Through a sublease, the farmer is working with BlueWave and Navisun to help run the crop trial for at least five years, which will include annual reporting and fabricating special equipment that can be pulled behind an ATV.

Maine is the world’s largest producer of wild blueberries, which are native to New England and Atlantic Canada. Roughly 36,000 acres are in commercial production, according to UMaine. Much of it is on the vast barrens Down East, but bushes also carpet the rolling hills along the midcoast.

To avoid conflicts, it may seem desirable to keep all solar projects away from any farmland. Solar arrays instead could fill so-called brownfield sites, such as closed landfills, or building roofs and parking lots.

But those sites can be more costly to develop and they’re limited, developers say. At the same time, there’s resistance to clearcutting large swaths of carbon-storing woodland.

That brings the solar siting discussion back to farmland, notably open fields and the dual-use strategies under study.

“The initial, knee-jerk reaction is, ‘why tie up farmland?’ ” said Alan Robertson, a senior development director at BlueWave Solar. “At public hearings, most abutters see it as a warm and fuzzy way to get the project built. There has been some pushback from folks who don’t understand the nuances of what we’re doing and why we’re doing it.”

Often overlooked in the discussion about solar and farmland, Robertson and other solar developers say, is the importance of lease payments for farmers. It’s not unusual for farmers in Maine to be paid $4,000 or so an acre annually for the 20-30-year life of a project. If a solar project has a footprint of 10-20 acres, that $40,000 to $80,000 a year can be an important supplement to help keep a working farm in businesses.

And while the expanse of metal and glass seems permanent, wherever solar rises on farmland, someday it will be gone. The permit in Rockport includes a decommissioning bond. And a state law passed this year requires owners of three-acre or more projects to have a decommission plan that includes farmland restoration.

Developers of the Rockport project declined to discuss the specific reimbursements for the landowner and the farmer. They did say the payment to the landowner is based partly on the power generated and acreage under production.

All this information was helpful to growers who participated in the tour, and reactions were mixed.

Cary Nash of Nash Farms LLC in nearby Appleton isn’t ready to go solar. He farms roughly 600 acres in the midcoast, is certified organic and supplies berries for a new sparkling wine. His first impression is that it would be too hard to move trucks and equipment around the solar arrays for an effective harvest.

“But I’m going to be very interested to see how it works,” he said of the project.

Ronald Ramsay of Columbia, who drove from the heart of Washington County’s blueberry barrens, said he was encouraged by what he saw. He harvests 27 acres and is working to put more into production.

Tux Turkel writes primarily about energy issues affecting Maine. Over the years, he has gazed into the spent-fuel pool at the now-gone Maine Yankee nuclear plant, looked across Casco Bay from atop Wyman Station’s smokestack, and toured power plants and wind farms across the state, but remains confused about why electricity doesn’t leak from our wall sockets. When he’s not trying to make sense of dense regulatory filings at the Public Utilities Commission, he’s likely to be hiking in the mountains or visiting Maine’s coastal islands in his small motorboat. A graduate of Emerson College in Boston, Tux lives in Yarmouth with his wife, youngest son, a cat and a guinea pig.